During World War II, there were lots of vacancies for workers in factories, because men had gone to the front line. So the government encouraged women to push through the limitations for housewives and went to the factory to contribute something to the war. Then the poster named “Rosie the Riveter” came out. On this poster, “Rosie the Riveter” wears red headband&work clothes and shows a strong arm to the world. It tells all the women worldwide” We Can Do It!” This poster was published by J. Howard Miller to express a powerful image of female, which not only encouraged millions of women to work in the factory but also a significant sign of that Times. 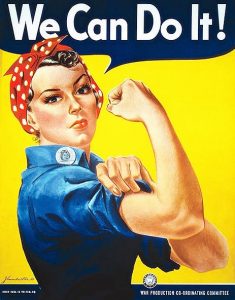 Mae Krier helped to make warplanes for a Boeing factory during World War II. Now, she is trying to fight against a different battle– COVID-19.

She always made some bandanas for Rosie travel when they went to Washington and places and whenever they do. And her partners love the bandanas made by Krier. Since coronavirus 2020, she started to make a lot of face masks. What made her stunned was that people worldwide were starting to send her material and elastic and everything that she needed for a face mask. However, she just mentioned briefly on Facebook that she ran out of elastic and she couldn’t go to a store, then a package with thread and everything she needed came. 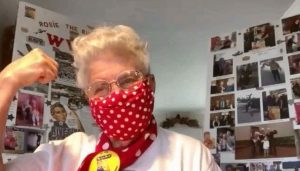 Krier firstly made the masks for her family and friends a few months ago. Someone posted about her masks on Facebook. More people knew Krier and her masks, and she got requests from folks across the US. She has more than 1000 requests so far and the requests have not slowed down. Krier has made more than 300 masks, and she realizes that she had to reach out if she wanted to make more masks. Later, a lot of people have offered to help her. “We’ll get there. We can do it,” she said. Krier uses a sewing machine to make the free masks. 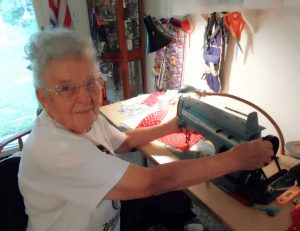 Actually, Krier has been busy for her campaign for Senate Bill 892, which would award Rosie the Riveter with a single Congressional Gold Medal that would be displayed at the National Museum of American History. It is an effort to recognize the contribution made by women workers and volunteers during World War II. The bill at present doesn’t get enough support to pass, but Krier is trying to change that. This one of the reasons why she keeps making masks.

According to the data reported by Johns Hopkins University, USA, by the 23rd, July, there have been 4.1 million cumulative confirmed cases. The situation is very severe if things go like this. The Centers for Disease Control and Prevention and President Trump recently has encouraged Americans to wear face masks to slow the spread of the virus. Many folks also have the awareness to wear masks to defeat coronavirus. But some people are still refusing to wear masks because they think wearing masks violates their rights. Even though many Celebrities Had Been Tested COVID-19 Positive.

Regarding this problem, Krier hopes people across the US could band together. She said she went through the Great Depression, the Dust Bowl, and World War II, and back then Americans banded together and did what they had to do. And she couldn’t understand why people are stress about the masks rather than COVID-19.